Once you have found a stock and determined it's worth investing in or not, you have to buy it.  More importantly, once you buy in, you eventually have to sell - otherwise you only have the stock and not the money.  It seems like buying and selling should be the easy part but the choices available in the process, as well as the timing of buying and selling itself, can make it perhaps a frantic process (but don't get frantic yourself).

Definitions:
- Market Order = buy or sell at the ask/bid.  Fastest but can be costly if the ask is high or bid low.
- Limit Order = set a bid to buy or ask to sell.  This is what you should normally use.  You basically wait for someone else to meet your price request or better, so it takes time but is cheaper for you.  Usually you want to set the limit a few percentages above your ideal buy price so that you at least you get into the stock if you're a tiny bit off (and reverse for selling).
- Stop Market/Limit = A "stop" basically means, don't put this order out until the price gets to this point.  It's more automation so you don't have to sit the whole 7 hours but can be dangerous if something unexpected happens and you automatically buy/sell.  I only use it to auto-sell if the stock drops too much when I'm not around.
- Trailing Stop = Same as a stop except you can set a percentage change.

As stated earlier, the only way a trade can occur is if a buyer and seller agrees on the same price - that is, you buy at someone else's ask or sell to someone else's bid.  You should be able to predict the price movement via chart reading to know if you might get a better price to buy/sell by waiting.  The other thing you might want to look at are Level 2 Quotes.

Seeing level 2 quotes might cost money depending on your broker.  For TD Ameritrade, it costs monthly but is free if you trade frequently (about 10 or so a month so not that hard to reach).  To access it in TDA, Command Center has an option under Tools > Level 2.  Notice the lower left here from an earlier screenshot: 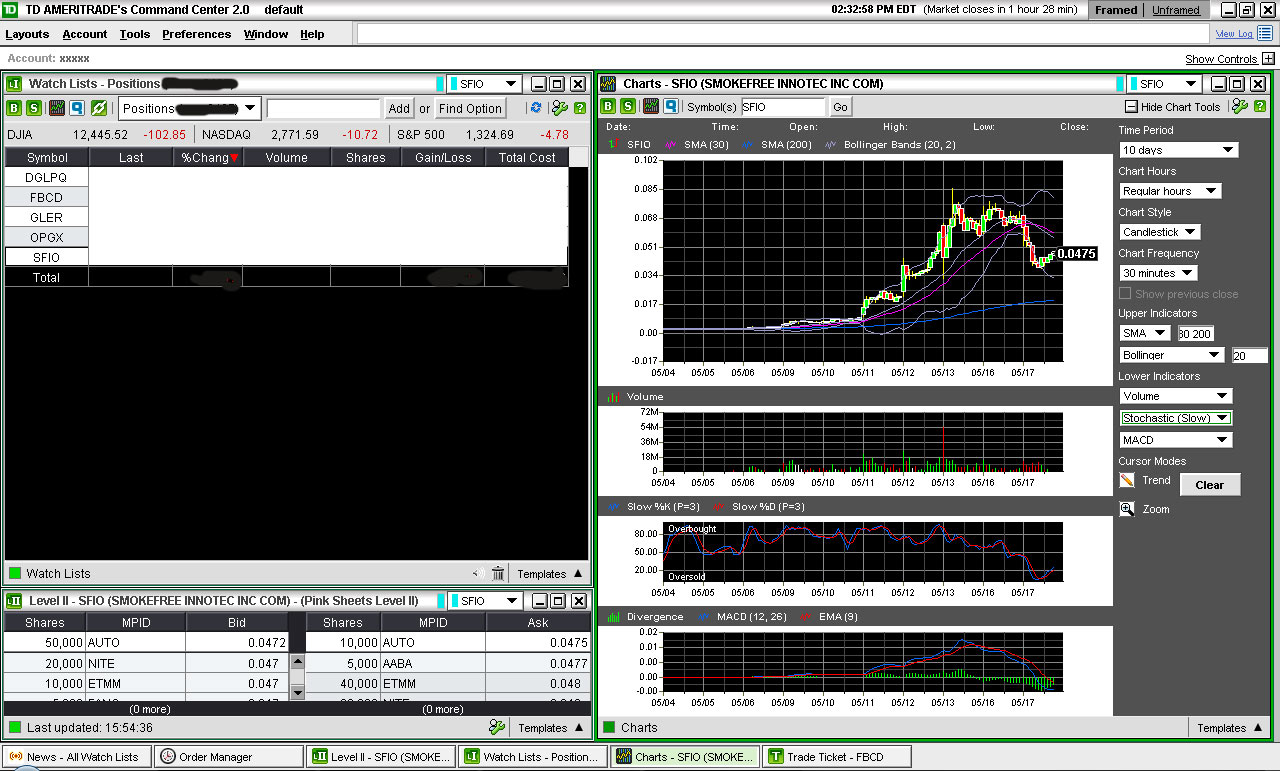 Level 2 quotes are basically bid and ask price "lists".  Previously, if you saw bid vs ask, you only saw the immediate bid or ask.  With level 2, think of it as being able to see even further down the line, the next bid or ask, to all the orders currently out.  This means if a bunch of people have a limit order to sell at $10 while the stock is at $8, you will see their "ask" price further down the line after the guys wanting to sell at $8.06, $8.10, $9, etc.

This might sound like an incredibly useful advantage, but keep in mind that the level 2 only represents the orders out "at the moment."  Think of it this way - even if you plan to buy a stock eventually, do you actually go out and put in the order for the stock  immediately or do you wait a bit, perhaps for for the price to drop? Most people wait.  So while it may look like no one is wanting to sell or buy (thin ask/bid), someone can suddenly decide to put an order for a million shares at any given moment.  The other issue is that not all orders are always visible on Level 2 - that is, even though someone put an order in, it might not always show up.

Level 2 then is useful to an extent - perhaps to see what is going on currently or to see how much it would take to "break" through a price level.  For example, if there were only 1000 shares being sold at $80 (1000 shares at ask for $80) and 500 being sold at $81, then someone can put an order for 1500 shares at $81 to buy out all the orders set at $80-81.  If no one else decides to sell in the 80-81 range, the next person who buys would have to pay higher.  The same goes for selling into the bid, but again, remember this is if everything were held constant and no one decided to put in additional orders.

Timing of the Day/Week

I mentioned earlier that timing is important.  This applies to reading the chart to see if the price might come down more to buy or go up more to sell, but it also applies to the time of the week and time of day itself as well.  It seems silly, but remember here that the market works by having people buy and sell.  When and how these people buy and sell most definitely affect the stock.

The main tendancies I've noticed are:
- Stocks are usually sell off (price goes down) on Fridays.  Think of it as people not wanting to worry about the stock over the weekend.
- The most active times of day are the first hour and a half (9:30-11am EST) and last hour of the day (3-4pm EST).  It doesn't necessarily mean the price will go up, but the most significant price movement usually occurs during these times.
- The "middle" of the trading day (11am-2pm EST) is the least active and where stocks tend to dip or at least slow down if they're rallying.  Think of it as people having to go to work or get lunch.  I would avoid selling during these times unless the stock absolutely dies, as the price will probably be better later.

Of course, this doesn't always happen and perhaps the psychology of investors might change over time so this is no longer true, but this is a trend I've noticed in the past two years.  If a stock, for example, ends up rallying on a Friday, it only makes the stock even more attractive as clearly the general tendency to sell off did not affect it.

One way to put this to use is to buy at the end of the day and sell in the next morning or afternoon.  This is not a bad idea at all, and some traders only do this as it can be a consistent to way to trade.  You might miss out if the stock happens to move up a lot during the less active middle of the trading day, but you don't run the risk of losing as much if it dies instead.  It's worth considering if you want to play it safe or are unsure of a stock.

Other Things to Keep in Mind

Buy in Portions:
If unsure, don't buy all the shares you want at once.  Perhaps it'll dip so you can buy more later at a cheaper price.  Some call this "averaging down."  The thing I warn against however is to know when you're buying more into a rising a stock on pullback and not buying into a stock that's actually dying.

Sell in Portions:
Similar to buying in portions above.  The other thing to add though is that if you own too many shares (particularly in cheaper stocks), selling everything at once might scare everyone else into not buying or selling their shares as well, thus driving down the price before you might fully get out.  Just think of your own reaction if you saw suddenly on Level 2 that someone put in an order to sell at a huge amount.  This is less of an issue (if at all) for larger stocks >$5.

Sell Some Before the News:
A lot of stocks you find will be driven primarily by upcoming news.  If you happen find yourself in such a situation, keep in mind that many will be expecting to cash out once news is released.  If everyone sells simultaneously, the price drops.  Again, this is less of a problem for larger stocks (>$5), but it still helps to sell in parts on the way up so it's easier to get out in case the price does fall after news.

Cutting Losses, Failed Expectations:
One of the harder things to do is to admit you've made a mistake and just need to take the loss or breakeven.  A lot of beginner traders often decide they are suddenly longterm investors when their stock dies or doesn't meet their expectation.  Don't fall for it.  If support lines break and the next one is much further down (or worse, doesn't exist), get out immediately.  If you expected the price to go up by tomorrow and it doesn't, move on.

Don't Panic:
The Hitchhiker's Guide to the Galaxy is very applicable here.  If the price starts falling, don't hit the sell button on impulse.  This might seem contradictory to "Cutting Losses", but the point here is to make sure the stock is actually dying and not just pulling back.  Check your support lines, check the STO, check RSI.  If lines aren't broken, then you probably are reacting emotionally.  If you want to calm your nerves, then sell a portion of your position (so you don't miss out if the stock ends up going higher later).

A lot of the advice seems to flip back and forth, but they apply to different scenarios.  The hard part of learning to trade is to recognize what's going on at the current moment.  On reflection, it'll be easy to realize what you should have done, what was actually occuring.  Use that to build your experience.
7754 unique view(s)

Hmm...seems I should read Weinstein's book before getting started on the virtual system:)